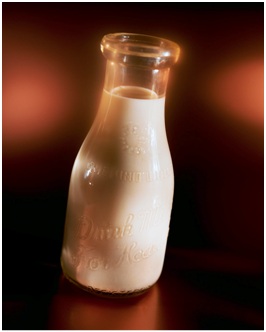 When my youngest was about to come into this world, my neighbor gifted me a milkman who would drop off some bare necessities weekly. In those days that included toddler must-haves for the older two, like apple juice, milk, eggs, popsicles on hot days and cream for the adults’ coffees. The milkman, Bob, was a longtime businessman with a longstanding route and territory. He had clients that had been with him for over 20 years at the time.

He carried the heavy stuff to my door, made small talk, left little holiday treats for my kids and when we got a dog, included a biscuit for her with almost every delivery. After a while the milkman was clearly not necessary. I was getting out of the house daily, working again, going shopping, and managing just fine with the help of some childcare. But by then we had a relationship with Bob and I just could not bear to sever it. So Bob stuck around. Eventually, since it was less expensive by a smidge at the store, I pared down my milkman’s list to just cream and the buttermilk my European-born husband still loves to drink nightly (he swears it’s good for you.)

Many years passed and this year, once again, I considered stopping the weekly milkman deliveries. We discussed it at home—we don’t really need it, it’s silly to pay monthly for these two items delivered every week, etc. I couldn’t do it though. In fact, even though Bob himself hadn’t been coming around for a while, his son had been delivering for him during a layoff because Bob wasn’t feeling so well. I still couldn’t let go of the connection. What would Bob think if I just said I was done with the relationship?  How could I explain breaking up with him?  I’d have to tell him over the phone, and imagining his silence made me queasy. He was a good salesman too. Maybe he’d try to pitch me a reason to stay. That would just kill me. I’m not great at saying no to a direct appeal.

In fact, not only did I not cancel the milkman, I left him a note. Since I hadn’t seen him in a while, I added a personal note to my check. It was just a sticky with a “Hi, Bob, I haven’t seen you in a while and I wanted to say hello and see how you are doing.” Bob called me when he got the note. He was so touched to be thought of—and he had bad news. He was closing his delivery route. What? I felt blindsided. I leave a “hello” and you end it?!? It was kind of a silly feeling, as I had been considering ending the relationship myself. But there it was—how different it feels to be told it’s over than to do the telling. Bob’s health wasn’t great (I think he’s around 85 years old) and he needed to be indoors this winter, not out in the cold schlepping milk cartons in and out of his van. I understand.  I’m an adult—I get it…his health is more important.

Yet, this weekend, when I had to buy a carton of half-n-half in order to enjoy my coffee, I choked up at the market. For 9 years I haven’t had to buy cream for my coffee except for a couple of times. I was really going to miss Bob. The personal connection we have because of a weekly dairy drop off touched me.

Once upon a time, every purchase anyone made was personal. There was no such thing as ordering from a stranger. Every part of one’s life was interwoven with providers and makers and givers and doers. My relationship with Bob the milkman was a holdout from the past, for sure. It was such a gift really, to have a person that brought me more than just the item. He regularly made me and my kids, and certainly our dog, smile (yes, I’m sure the dog smiles.)  The relationship was a small one of the many in my life but I will feel that twinge of missing it for many years I’m sure. I can’t bring myself to dispose of the cooler from his dairy that sits on my front porch so it’ll stay there for a while. And I’ll send Bob the occasional note, or call to say hello, because really we became friends through these years. That’s the real gift my neighbor gave me I suppose—milk delivered and a friend for many years.