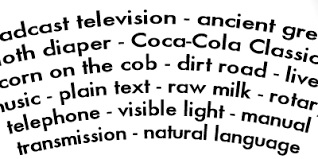 We love the term retronym. A retronym refers to something that was formerly called one thing, but then is replaced or updated in a way that it has to have a new name in order to be differentiated from its replacement. Here are some examples of retronyms:

Acoustic guitar: An acoustic guitar used to just be called a guitar. Then Les Paul came along and changed rock and roll forever. Now, you have to call those guitars that aren’t plugged in and amplified an acoustic guitar.

Analog clocks: These used to just be called clocks, until those geniuses who clearly hated all of the time problems from elementary school math decided that digital was so much easier. Presto! Analog clocks were reborn.

Desktop computers: Ah, remember when computers were only in geeky labs in college campuses. Then they migrated to offices and homes. Then, the evolution of smaller and smaller devices began, so the invention of the laptop meant that our old computers had to be called desktop.

Brick-and-mortar. We used to call these things “stores” in the old days. Now that e-tailing is prominent if not predominant, we had to back up and create a term that differentiated “real” shopping from “cyber” shopping.

English Muffin. Yes, in Southern England, it used to just be called a muffin. But the good old American muffin was so tasty and sugary-good, that it had to be renamed to differentiate the delectables across the pond from one another.

Manual typewriter. Duh. The term was invented after the electric typewriter was born.

Conventional oven. What’s so conventional about that oven? Well, it predates the microwave, so every prepared food has to have two sets of directions as to how to reheat things (and sometimes the conventional is still better…)

Forward slash. Before those long internet addresses, we just used to call that symbol on the bottom right of your keyboard a slash. But the intrusion of the backwards slash meant the invention of a retronym.

Corn on the cob used to be called….wait for it….corn until the popularity of canned corn required a retronym.