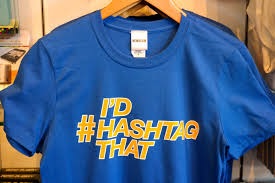 Creation of good Twitter hashtags is more art than science. The Twitter hashtag has to be memorable and should be a little protected from being mocked. The hashtag’s home social media channel is Twitter, but we see hashtags everywhere now, on Facebook, Instagram and Snapchat posts. Hashtags are not only a way for people to “gather” around a similar issue, but as appendages to posts, they allow a commentary, often wry, on the post or the mood of the poster.

So, for your perusal, here are some recent hashtag fails and the lessons we can learn from their failure:

#celebration #of #learning: A local school (which shall remain unnamed) posted on their Facebook account an end of the year celebration of seniors’ recent projects. Unfortunately, the “marketing guru” did not understand how hashtags work and posted these way too generic hashtags, which were then picked up by the far more savvy high school seniors and reposted, tweeted and appended with their own snarky remarks.

Lesson: Understand how hashtags work before diving in. Ask a tech-savvy friend or colleague or find a somewhat wired adolescent to at least peruse your hashtag and give you feedback. Ideally, hire a marketing consultant.

#wtff: If you missed it, this was a failed Burger King hashtag where the letters stood for “what the French fry”. As you can imagine, this was not a rousing campaign.

Lesson: Your hashtag has to be immediately understandable by reasonably intelligent people. Also, “wtf” has other connotations and just adding another “f” doesn’t fix that.

#nowthatchersdead: This hashtag went live when Margaret Thatcher died (during a spate of other famous people’s death, thereby necessitating the “now”). Unfortunately, the lack of punctuation and spacing  that is a part of hashtag regular usage caused people to read it as “now that Cher’s dead” and assumed incorrectly that Cher was dead, which she wasn’t and still isn’t.

Lesson: Run your hashtag by others and be sure there are no ambiguities.

#notguilty This was the hashtag that Entenmann’s used to promote their newest low calorie baked goods offerings. Unfortunately, #notguilty was already trending following the decision in the Casey Anthony murder trial. Entenmann’s not only didn’t like being associated with a murder trial, but the entire #notguilty campaign was quickly derailed.

Lesson: No matter how well-thought out your hashtag is, you must go onto Twitter and search for the hashtag to ensure there are no unsavory aspects of it. Current events may obviate the need to abandon even the best hashtags.

#askVentra, #McDStories, #askJPM: These were various hashtags created by Ventra (the Chicago transit authority), McDonald’s and JP Morgan. All were bombarded with completely negative Tweets and created far more negative buzz than anything else.

Lesson: Be sure that your product is without reproach at the time you launch the hashtag. And even if you think it is, come up with an exit strategy if things go bad.