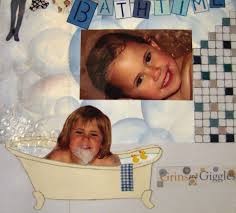 I don’t buy acid-free paper and attach every picture and memento on a designer piece of paper and place them inside sleeves with beautiful decorations, stickers and cutouts.

But I do save pictures, show tickets, school photos (including sports teams!), report cards, birthday and anniversary cards, letters back and forth from camp, and even the enclosures of flowers from my husband (because they are a rare sighting).

And 1-2 times a year, I dump the top drawer of my dresser where these things accumulate and do the following:

This past weekend, I scrapbooked 2014-2015. And I was happy. But, I noticed that my ratio of pictures to ephemera is shifting radically over the years. The number of pictures is pretty small; it consists of official graduation pictures, team photos, school photos and a roll of old fashioned film that I sent on a disposable camera with my daughter to camp.

So, now this week, I’m going to have to do some reconnaissance work. I’m going to have to move photos from my phone and from my email and from attached images in text messages to my home computer and on to my printer. I’m going to have to ask my daughter to find pictures of her trip with her grandparents and create a document with pictures (and even captions) to accompany all of the stuff she dutifully gave me that is already scrapbooked (museum tickets, restaurant stubs, airplane ticket).

What’s it all for?

Sometimes I ask myself, “Who cares about these scrapbooks?” I guess, ultimately, I do. I also know that my mom never scrapbooked. Her “stuff” is in shoeboxes, unsorted, unlabeled. In the, I hope far distant future, when she isn’t around, will I even know what’s what?

But then an event galvanizes my resolve. Last year, my daughter’s friends were over for her birthday and somebody mentioned a middle school basketball team picture, and I, of course, found it right away, in the scrapbook. This led to a call from her friends for the other scrapbooks, which I dutifully brought out. I cannot tell you the hours of entertainment and reminiscing that the scrapbooks provided, in a way that scrolling through photos on a phone or even on a jump drive just can’t do.

So maybe I scrapbook for me, for my mom, for my kids.

It’s my way of facilitating memories.