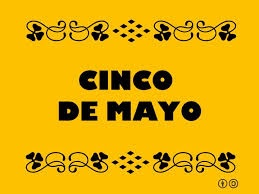 In case you have been sleeping in a cave, we remind you that today is Cinco de Mayo, the 5th of May, another holiday that is known by its date and not its importance. You can add that to the Jewish holiday of Tu B’Shevat and the Texas holiday of Juneteenth (go look those up yourself…)

So, what exactly is Cinco de Mayo and what does it have to do with marketing? In a word, 1) amorphous and 2) everything.

First, let’s start with what Cinco de Mayo is not:

OK, we have that settled. So, what actually happened on May 5, 1862 that turned every town in America into Margaritaville?

A small army of Mexicans (comprised of mixed heritage Mestizos and Zapotec Indians as well as Spanish-speaking residents) defeated the French army at the Battle of Puebla. The French arrived on Mexican shore after the Mexicans quit paying off their debts to European countries.

Mexicans who were living in California and Oregon got word of this victory and perceived it as a real victory for freedom. Why? The French, led by Napoleon III, were beginning to ally themselves with the Confederates and were perceived by the Latinos in the American West as being elitist supporters of slavery. Napoleon III reportedly had plans to take over Mexico and to make it a monarchy. These same Californians were ardent supporters of the Union movement and zealously democratic and anti-slavery. They were nervously watching the activities on both fronts: in America and in Mexico.

In America, the Union was really in a bottleneck in 1862 and was not making headway against the Confederacy. And down in Mexico, the French had made it to within 60 miles of Mexico City. These Latinos in California and Oregon feared that a successful French campaign not only threatened Mexico, but threatened the Union’s cause, too.

When the news arrived of the routing of the French, the Latinos of the West were indeed thrilled that the French came to Mexican soil and were defeated. They hoped this would cause the retreat of the French from the nascent Mexican democracy and from the New World in general. This news galvanized the Latino groups of the west and served to encourage them through the long ordeal of the American Civil War and Mexico’s struggles against intrusive foreign powers.

Cinco de Mayo retained the interest of those who served in the Mexican and the Union armies, who exhorted their listeners with the heroics of that day. Then history moved on and the celebrations died out….for a time. Cinco de Mayo was resurrected with the Chicano power movement of the 1960’s and slowly began to spread into the American consciousness as a generic day to celebrate all things Mexican.

Which brings us to marketing today….So, who are the largest “advertisers” leading up to Cinco de Mayo? The hospitality industry (bars and restaurants), liquor sellers, party store owners. They have tapped into the need to celebrate, combined with the warming of the weather and the winding down of the school year. The original historical connection is largely forgotten, certainly the connection between this victory and the anti-slavery movement.

And maybe that’s ok. As history buffs, we like knowing what we are celebrating and the real history resonates. But perhaps it’s just fine to distill (pardon that liquor-related word) a complex history into…Una mas cerveza, por favor.